Clients per month: 2 to 4 births and 2 to 4 postpartum families

Attends birth center births? No Birth Centers
There are currently no birth centers in my area 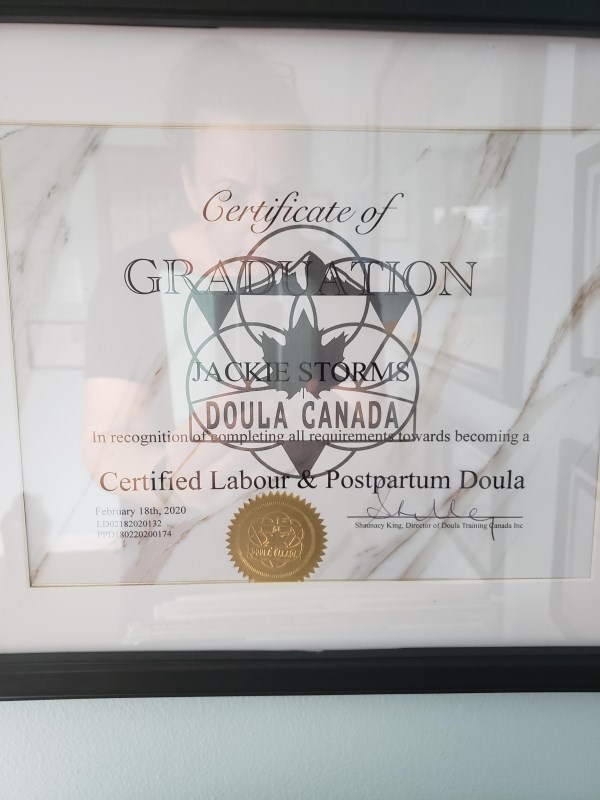 She is very supportive and helpful. She came to our house to help us during that hard time. As we have no family here with us, me and my husband were scared and worried. But she was with us like our family. I feel like my mom was with me at that hectic time. We met on the day of my delivery and a lovely bond is formed between us. We are really thankful to her. We can never forget her support and help. Thank you Jackie so much! You are such a lovely and generous person..........??

As a first-time mom, I was pretty nervous about the whole labour and delivery process. My husband and I had Jackie as our doula, and it was honestly the best decision we could possibly have made. From our first contact, all the way to after giving birth, I knew that I could contact her if I had questions. On the day of, she arrived more prepared than I could ever have anticipated. She even brought straws to make it easier to keep me hydrated! She had me do a variety of things, from sitting on an exercise ball (which she also brought) to walking sideways up and down the stairs. Although I remember hating doing those things, I absolutely think that they caused my labour to progress beyond the latent labour I’d been in for several hours.

Jackie has an incredible demeanour — calm, gentle, firm, knowledgeable, and immensely encouraging. Every time I said that I couldn’t do it, or didn’t want to (I vaguely remember saying something along the lines of “I’ll just keep him inside me forever”), she helped to reframe the pain of contractions as the thing that would get baby out. I struggled to be positive during labour, and so it was helpful that she was able to be positive for me.

Having Jackie as our doula also meant that my husband could take on a more encouraging role, rather than trying to give me directions and guide me through the process. (This meant that I swore at him much less than I otherwise might have.) She could also tell when we definitely needed to go to the hospital, which was sooner than my midwife had initially advised. If not for Jackie’s knowledge and expertise, we may have gone in to the hospital too early or too late.

I would 100% recommend Jackie to any and every mom, but especially first time moms. Her support throughout was essential. I don’t think my delivery experience would have been nearly as positive without her guidance and encouragement.

The birth of our first child was the most amazing, trans formative and important moments of our lives. It was also one of the most stressful, scary and chaotic moments of my life. As the husband I found myself worrying about meaningfully supporting my wife during this momentous event.

She of course was going through extreme mental and physical pain and stress in order to bring our son into the world. But, instead of being overwhelmed or feeling completely lost and without any ability to support and help my wife, I felt empowered and guided by the wonderful Jackie Storms our Doula and saviour!

Her knowledge, positive attitude and energy along with a calm and collected demeanor enabled me to be a useful contributor to my wife’s labour. It was such a relief having her there to provide us with information, options and alternatives to move things forward in a healthy, calm and natural manner. She came prepared and thought of everything we might need. My wife was also appreciative of Jackie's attention. To the small details like covering the hospital surfaces my wife needed to sit or lay on and making sure her dignity was still intact by helping to cover her up while walking through the hallways.

I cannot imagine our labour without Jackie’s warm presence and guidance. She was absolutely instrumental before labour as well. Providing a horde of additional information and options after each major visit with our Doctors. As a side note, Jackie was also great with our furry family member. He was always sad to see her go!

I was very skeptical of hiring a doula before our son’s birth but was completely won over by Jackie. Will never forget her tremendous positive impact on this amazing life experience. We are extremely greatful.

There are not enough words to describe how wonderful Jackie is. She was everything I didn't know I needed. Her knowledge her patience, strength, love and presences helped me through the toughest moments of my life. She was able to calm and reassure me and guide me through what a birth plan was a month before and then helped me throw it out the window when my baby needed me to.
Having someone to help support me, to support my partner in a hectic time is worth so much more and I am so happy that I met her and had her as my Doula. I sincerely wish I had met her 4 years ago for my first child. ?

For baby #3, my husband and I decided to have Jackie join us on our journey. We felt we knew pretty much everything we needed to know from the last two kiddos, but still wanted to ensure we had someone there supporting us so we could just focus on each other and the baby. I very much wish she could have been there for our other pregnancies!! She was so calming and serene. She didn't once 'handle' me or tell me what to do, she was just respectful and positive the entire time. My hubby is very dependent on direction from me to know he is doing the right thing, but I couldn't be that assurance for him while going through contractions. Jackie talked him through everything he would need to know and looked out for cues that he was stressed or anxious and helped him find his calm, which calmed me in turn! It was SUCH a beautiful, blessed day. Jackie is incredibly kind, calming, attentive, knowledgeable, joyful and humble. We were so honoured to have her with us and I would HIGHLY recommend her to anyone considering doula support. I can't even write this without tearing up as I listen to our son cooing beside me. He’s such a beautiful, happy boy and we both believe this is due to the peaceful setting he was born into, something made possible by Jackie. ??

Being a relatively new immigrant and no other relatives in BC, having Jackie around helped me and my husband a lot even if it was a scheduled Csection (but delayed for 12 hours!). She brought calmness and organization, and really answered our questions, our what ifs, and shared her experiences and knowledge. Very warm person, and very generous in sharing "herself" to my family. Thanks so much, Jackie!