Fee Details: Fee's will vary depending on location, and travel time. I offer free consultations. A retaining fee of $175 is due upon hire the remainder is due at 38 weeks. cash/check/venmo/paypal 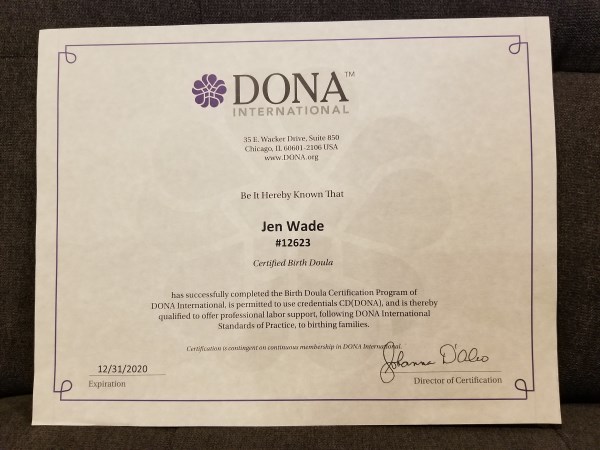 Post a testimonial of your experience with Jen Wade

When choosing my doula I wanted to have an experience of meeting someone and "just knowing" they were the right fit for my birthing experience. This happened right away when I met Jen. She has such a great presence and energy and she was exactly what I was looking for. I loved that she had a "birthing doula only" as an option because that is exactly what I was looking for. Even though I chose the birthing only option I felt like I was able to build a bond prior to our experience because she was so communicative over text. I loved that she checked in on me often. When the birthing day came she was there in a snap and immediately brought with her the comforting presence I wanted. She was so knowledgeable and helpful through every twist and turn without ever stepping on toes. She helped my husband help me which is what I wanted. It was awesome having them work together as a team. I honestly can say I had the birthing experience I wanted and Jen had a lot to do with that. Would definitely use her again in the future. Added perk that she took some amazing pics.

This was my 1st pregnancy & I wanted a natural birth. We chose Jenn because she understood what we wanted & was the most professional.
I went into labor & we contacted Jenn. She offered to come over & rearranged her plans, even though it was early. By 4 PM Jack, my fiancé was too anxious. Jenn was at our house in mins & brought this amazing positive energy & genuine excitement. She calmed Jack, while monitoring my contractions, communicating w/ my family, & providing me w/ incredible hands on help through intense contractions. She never left for dinner or breaks & never complained or made us feel like she was restless. At 9 PM Jenn helped us make the decision to go to the hospital.
Upon arrival, I was only dilated to 5 cm’s! I was deflated but, Jenn's positivity never wavered. She gave us a 2nd wind of energy! Jenn stayed w/ me, while providing comfort to Jack who was having an extremely difficult time! Finally, I had dilated to 9 cm’s & the Dctr arrived & saw the amazing teamwork we had achieved, w/ Jenn leading as the captain. Jenn reiterated my goals for a natural birth. As hrs went by the Dctr became concerned. It’s now been over 10 hrs for Jenn, who still hasn’t taken a break, or stopped encouraging us both through this insane birth! I feel any Dctr would have given me a C-Section & never would have tried to honor my wishes, if he hadn’t seen the work we had all put into the process. Finally, the Dctr said he would need to use forceps. Jenn helped me understand the urgency of the decision & let me make it. If she hadn’t stayed, I never could have made it this far. After the anesthesiologist gave me a spinal tap, I told Jenn she should go & she refused. After another hour of pushing finally, my baby arrived at 4 AM, & Jenn, 12 hrs later, was just as positive & calm as ever. Jenn now feels like family. She’s much more than just a Doula!

Jen was wonderful to work with. Her personality fit well with mine, and she was committed to making sure I had the birth experience I wanted. She provided me with resources and ideas that were helpful to me in crafting a birth plan. In the end, she was supportive of whatever I wanted and never tried to push something I didn’t want. During my actual labor she helped me with comfort measures, and talked me through the harder parts of labor. My spouse also loved having her there because it helped him feel empowered to be helpful when he had some direction. At our follow up appointment I expressed some feelings of inadequacy to Jen because of how hard my labor had gotten for me near the end and how I hadn’t dealt with it as calmly and gracefully as I had envisioned/practiced. She reassured me that it wasn’t a sign of weakness, and that labor is just hard, and that I did it the way I wanted in the end and pushed through. I was grateful for her words of affirmation. If I have more children in the future, I will definitely hire Jen again.

Jen is a very special person. Within minutes she put me at ease and gave me confidence that she would be a positive and wonderful addition to the delivery of our baby girl. I love that she was attentive to our needs and supportive of our wishes. We had discussed having a natural (as possible in a hospital) birth with few interventions, as a goal in the meetings prior to my delivery and Jen did an amazing job listening to our wishes and helping keep us on track during the delivery. After our baby arrived, when I was exhausted and brushing off questions from the hospital staff, she reminded me of what we had previously discussed to make sure that the intervention they were going to do for the baby was really what I wanted. I was so grateful for her attention throughout my pregnancy and how she was genuine and warm when checking in. She asked great questions to really understand my needs and how I visualized her role in the delivery room. I had a very fast labor (woke up with 5 minute contractions, progressed to 3 minute within an hour), Jen had made sure her schedule was clear during my due date week, so when I called she was ready and available to assist. I had not been expecting things to go so quickly, but Jen was great when faced with the unexpected. She was there to meet us at the hospital and my husband commented on how great it was to have her there to help me do what I needed to do so he could focus on supporting me. During my short labor, things got pretty intense and Jen did an amazing job mobilizing quickly and using counter pressure to help me keep calm and keep things progressing well. She does a great job predicting needs and was very good at communicating clearly and calmly to staff and to me what we could do and keeping my head in a good space. I was so happy to have her there. Jen is a wonderful person and perfectly suited to give incredible service as a doula. I could not recommend her enough!

I met with multiple girls when I was in the search for a doula.  I had heard/read so many experiences where when they met the doula for the first time "they just knew it was the right match" but that wasn't happening for me.  I finally reached out to Jen after meeting with multiple others and when we met up I honestly got that "I just know" feeling.  I was wanting an all natural/unmedicated birth and especially because it was my first child most people discouraged it or gave me a million reasons on why I wouldn't be able to do it.  When I told Jen the kind of birth I wanted she 100% supported me and convinced me that I would be strong enough/capable of doing it!  Having that support even before my baby came made all the difference.  I didn't know what to expect with labor or with how to prepare myself mentally to go through labor and Jen helped with all of that! She sent me hypnobirthing tracks to listen to Dailey leading up to birth and those definitely helped get my mind ready for what I was going to do.  My husband didn't know what to expect either and she definitly helped prepare him as well. Him and her worked together with me as a team during labor through each contraction. I absolutely couldn't have done it without her! When the contractions would get more and more intense she would remind me why I wanted to do it naturally and it helped me keep taking it one contraction at a time and in the right mindset.  I was able to have exactly the kind of birth I was hoping for and I really don't think I would've if I didn't have Jen there!  We brought a camera and she captured so many amazing moments during labor, as my baby was born, and after as well.  I will reccommend her a million times to everyone having a baby especially those wanting a natural birth.  She is amazing and so personable! I instantly felt comfortable with her and couldn't be more grateful I got to have her as my Doula.

Before Jen I didn't know what to expect from a doula and I didn't think I would ever use one. Now I am so grateful that I had her and would recommend her to anyone having a baby. Jen was patient with me as I questioned her about every little ache and pain I had before having our son. It gave my husband and I peace of mind knowing that I didn't have to rush to the hospital every time I felt something I hadn't felt before. When the time came to have our son Jen was right there giving us the exact amount of support we needed. I had an epidural but due to some complications we still needed a lot of advice on the steps to take next. Jen was right there telling us what the options meant and even if it wasn't the decision she recommended she supported us 100%. Jen was such a calming presence and I am so grateful that she was with us in the delivery room.

January 20, 2017 was the birthday of my third baby. It was such an unforgettable experience for me and for our whole family as my two first children were born in Russia without my family next to me. And of course I didn't even know then who doula was.

This time was so much different! I had my family with me and Jen as a doula. That was just amazing! I felt so much support from all of them. I don't know how could I survive without her. Especially those last 15-20 minutes before pushing. Thanks God she was there helping me to breathe and relax. And back massage made me feel confident that I would be able to do that. And so we did it together! I delivered a healthy baby boy without any epidural!!!

Jen is a nice, sweet, kindhearted professional. She is a mom of four sweet kids and knows how imporrant those moments are. I'm so happy she was there with us helping and sharing this moment of pure happiness!

I really appreciate Jen's contribution and feel so much thankful to her! So I highly recommend Jen Wade as a professional doula! I'm sure you won't regret;)