Clients per month: to 3 births and to 3 postpartum families

I provide my clients with compassionate, unconditional, and non-judgmental support throughout their pregnancy, birth, and postpartum period. Contact me to learn more about how I can support you. I would love to chat about your birth! 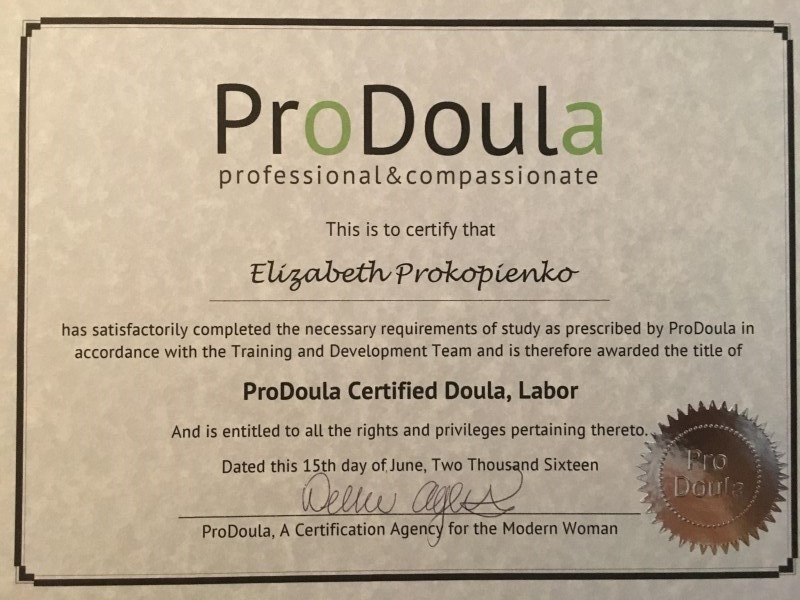 When Thea was born the only thing that went as planned was having an awesome Doula!We'd set up at a birthing center for a natural birth. At 41+1 we had a non stress test, Thea wasn't moving much but had good vitals. She'd need some help coming out. The birthing center was out the window and my wife, Allison was moved to L&D to be induced... and induced again 6 hours later. Then our poor midwife had a family emergency in another state!

We'd learned that labor could last a LONG time. It did. Elizabeth called every few hours, to ask how we were doing and keep up on the labor markers. We didn't want to call her in too early since Allison wasn't dilating. By the next morning things were getting rough. Allison was having continuous rolling contractions, was exhausted and Thea was no closer to being born. Elizabeth was there like a superhero in less than an hour, just in time to facilitate some much needed pain management and help Allison get her epidural (you know what they say about the best laid plans). Our only mistake was not calling her in sooner.

Throughout the day she was a supportive and reassuring presence, regularly checking with the nurses and with us, helping us with all kinds of different techniques for progressing the labor. Despite our best efforts, and an episode of projectile vomiting that landed all over Elizabeth, the little one just wasn't coming.

We thought Elizabeth was great from our first meeting, bright, friendly, supportive and well informed. We were only more impressed with her as our level headed, reassuring "Sherpa" through what could have been a very scary process as we ran into one unexpected turn after another. Despite nothing going according to plan, with her help we felt confident that we were doing everything to achieve the best outcome for our baby. Late that night we decided it was safest for us to go ahead with a C-section, and Thea was born, perfect, and not at all as originally envisioned! ??